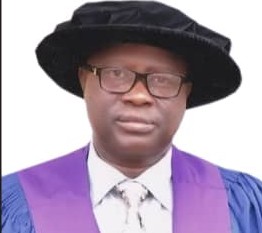 Associate Professor Babatunde Ishola Omotowo obtained an MBBS degree from University of Ilorin, Nigeria, in 1987. He completed MPH from University of Nigeria, Nsukka in 2006, and  FWACP from West African College of Physicians in 2009. He briefly worked as a Medical Advisor for German Leprosy and Tuberculosis Relief Association (GLRA). While at GLRA, he participated in providing supportive supervision to health workers on TB, TB/HIV, Buruli Ulcer and Leprosy Control Services.  He was also a facilitator at GFATM, TBCAP, GHAIN and TB-REACH funded training workshops for Medical Officers and General Health Workers on TB and TB/HIV collaborative activities in 14 GLRA supported states of Southern Nigeria. He was employed at the Department of Community Medicine, College of Medicine, University of Nigeria, Enugu Campus as a Lecturer 1, and Honorary Consultant at University of Nigeria Teaching Hospital, Enugu, in August, 2012. He became a Senior Lecturer in October, 2015, and later promoted as Associate Professor, in October, 2018. He was MBBS Coordinator in the Department from August 2012 to August 2018, and served as Head of Department of Community Medicine, and a member of the Senate of  PAMO University of Medical Sciences, Port-Harcourt, from September 2018 to September 2019, while on sabbatical leave. He is currently a member of the Senate of the University of Nigeria, Nsukka.  He has taught and supervised students projects both at undergraduate and postgraduate levels. He is in Epidemiology unit, and a member of both Faculty Accreditation Committee, and Ethics Committee of College of Medicine. He is also the Chairman, Committee on Infection Prevention and Control (IPC), at University of Nigeria Teaching Hospital, Enugu. He is a member of National Expert Committee on Adverse Event Following Immunization and Causality Assessment. He has attended many national and international conferences including Union Conference at Lille, France in 2011, World Congress on Infectious Diseases, at UK in 2015 and USA in 2016. He has published some papers in both local and international journals. His interests are infectious and non-communicable diseases. He is happily married with children.   Read More….